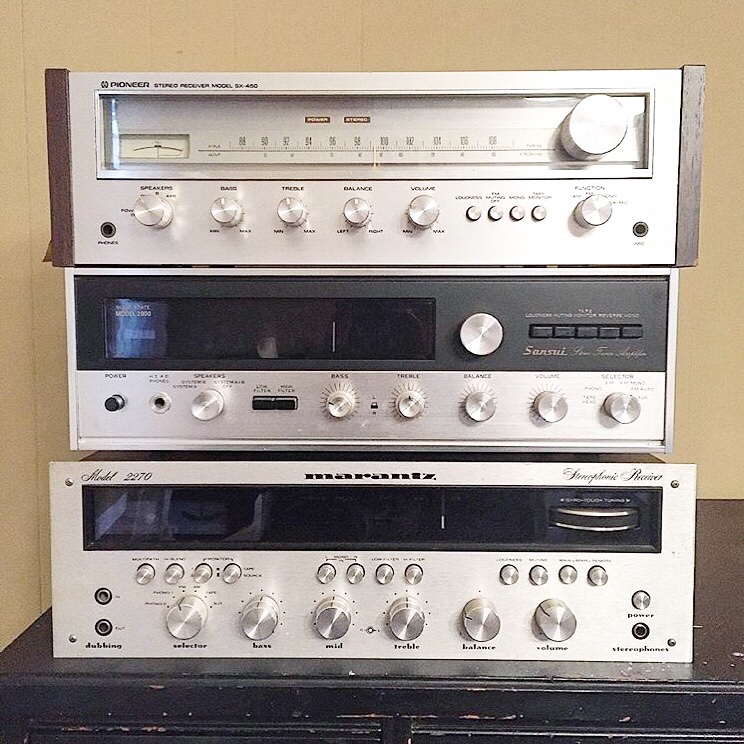 All I wanted was a Marantz 2270 receiver but prices were escalating between $750-$1,000 for used units and that was just too far out of my budget.

I’d been researching vintage receivers for over a year, having decided I wanted to completely rebuild my stereo system from the ground up with all vintage gear. I have owned several stereo systems in my life but never with any vintage pieces included. All my research led me to Marantz, specifically the 2270.

A few years ago, while visiting family in Alabama during the Christmas holiday break, I went hunting for Marantz receivers on craigslist. I found someone in Manchester, TN, selling a Marantz and a couple other receivers for $600. I immediately contacted him and we went back and forth a few times before finally he told me if I wanted these I could have them but he had another buyer behind me bugging him. The next buyer didn’t want all three so in order for me to do the deal I had to purchase all three at $600. I jumped on it.

I had to meet to him very early on a Monday morning at a Cracker Barrel in Manchester, TN, which is a 45 minute drive in the opposite direction of my office. The man was very nice, explaining his elderly father was a hi-fi nut and he was cleaning out his collection.

The receivers included in the purchase are pictured above, a very clean Marantz 2270, a Sansui 2000 and a Pioneer SX-450. He told me the Pioneer was not working properly but the Sansui 2000 was still in the original box and even included the receipt from where his dad had purchased the receiver brand new in the 1970’s. The one thing I’ll never forget was picking up the Marantz receiver and placing it in my car. The receiver weighs almost 40 pounds and I had never picked up a piece of stereo equipment that heavy before.

I finally had my Marantz 2270 and it sounded great. I was so nervous hooking it up, worried it wouldn’t work properly after paying someone $600. Thankfully it did and I’ve used it as my every day receiver since. As for the $600 price tag, I sold the Sansui and Pioneer receivers for around $200 so really my Marantz 2270 only cost me $400. Of course, once I had the Marantz in place, I then had to upgrade all of my other stereo components, a story for another day, especially how I came to own my Pioneer HPM-100 speakers.

This one purchase started my love affair for vintage audio gear and I’ve been buying and reselling ever since.

One of my other (obvious) favorites from the stack of 1,000 45s that I bought from Barbara over the holidays. Thanks again Barb.
Finished! The Marantz 2230 now has a new bridge rectifier as well as all new caps and transistors on the amp, preamp and power supply boards. Voltage and bias set back to normal. This is my first complete rebuild and I’m really happy with how this one turned out. . And now we enjoy listening. So far my listening partner Boss is really impressed ➡️. . #vintageaudio #marantz #marantz2230 #vintageaudiorepair #vintageaudiorestoration
Here are five songs I wrote about this week including some reggae and disco flavored gospel with a dash of CCR classic rock. I also included some gear repair updates and books I’m reading. . Click the link in my bio to read more and listen to each.
The Sansui 2000x is going back to the bench for a few more upgrades (noisy tantalum caps on the phono board need to go) so welcome back my Marantz 2270. At some point I need to rebuild the phono board on this receiver too but that will happen once I finish the Marantz 2230 rebuild and the Sansui 2000x.
Why not Wednesday night jams.
Plugged some catalog holes today thanks to a local antique store.
%d bloggers like this: