At the record show this weekend I bought two crates full of 45s from a friend who just wanted to unload them. I paid $20 for over 400 singles and two crates. I figured even if the 45s were junk, the crates were perfect for storing my LPs at home. Who knows, maybe I’ll find a gem in the stack of 45s.

Most people are annoyed by 45 singles but I have a certain affinity for them. I enjoy cleaning them up, listening to each and filing them away in my collection (if I decide to keep them). Also, I’ve found so many awesome b-side songs that I can use in my DJ sets. I dream one day of just doing a full DJ set with nothing but 45s.

In the first crate I stumbled on a beautiful green label for Glades Records by an artist, Timmy Thomas, with songs entitled Why Can’t We Live Together and Funky Me. I knew I had to listen. 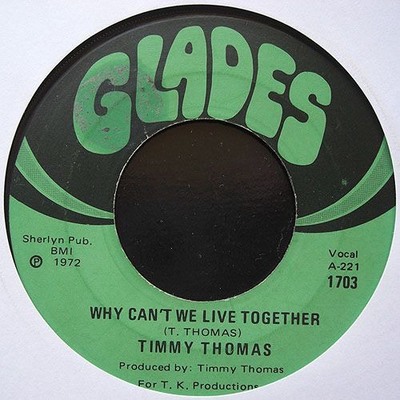 What I discovered is Timmy Thomas was the first artist to release a full album featuring a drum machine instead of a live band. That led me to check out his debut LP, Why Can’t We Live Together, released in 1972.

The album is a perfect lo fi soul album, not something you normally consider possible for a release in that genre outside of maybe, Sly Stone’s There’s A Riot Going On. Check it out if you’re fan of Sly’s album or just soul music in general.

I’m definitely going to keep my eye out for the LP now that I have the 45.

One thought on “Why Can’t We Live Together”